You do need to have a blog to participate in the BSBP, but Lori is experimenting with a Facebook version (no blog needed)...

Please head on over to the Bead Soup Cafe if you'd like to sign up for that (limited to 20).
Posted by Moobie Grace at 11:27 AM 0 comments

Memories and Thanks Blog Hop

As usual, Lori Anderson of Pretty Things, organized not only a hop to bring us all together and enjoy each other's creativity, but also one with meaning, wrapped in love, and memories.  For myself, the predictable tribute would be for my Mom, but I decided that was too easy, it didn't challenge me (been there/done that) and that I needed to dig deeper...

I drew a blank until Thursday morning.  I had nada!  No ideas, no plan of action, and no more time to "think on it."  About that time in walked my 11 year old, demanding we get started on the day's lessons...what kid does that?  Yes, that is when the good ol' proverbial light bulb went off!

She faces obstacles that definitely aren't noticeable by looking at her, or even after talking to her...they are hidden...like so many other learning disabilities, yet still affect her every second of every day.  Her Dyslexia doesn't by any means define who she is, but rather forces her to try harder, view things in a different light, not to judge anyone/anything by what she sees, to look deeper within to herself to find a way that makes sense, and has a wisdom that I can't seem to fathom....things that SO many of us should learn to do!  Disability? Or is it a gift that few us of can ever obtain??

Moobie Grace - December 2012.  She was so proud of her "ugly" shell.
"Because if you scrape off the bumps, it looks like a rainbow!"  While
she struggles with many things, I'm proud that she can see deeper than
what's on the surface!

So, I set out on a mission to create a tribute-worthy piece.  It was only logical to let Grace pick out a few of the elements....okay, most of the materials!  They may not make sense to you or I, but that is entirely the point!  Because, try as I may, I know I will never understand what she faces, how she feels on a daily basis, or how her mind learns.  What I can compare the LD to is trying to read/write in a different language every day, and nobody else having a problem doing so, and no one being able to explain the logistics...makes you think, doesn't it?

"She Believed She Could, So She Did" - Necklace 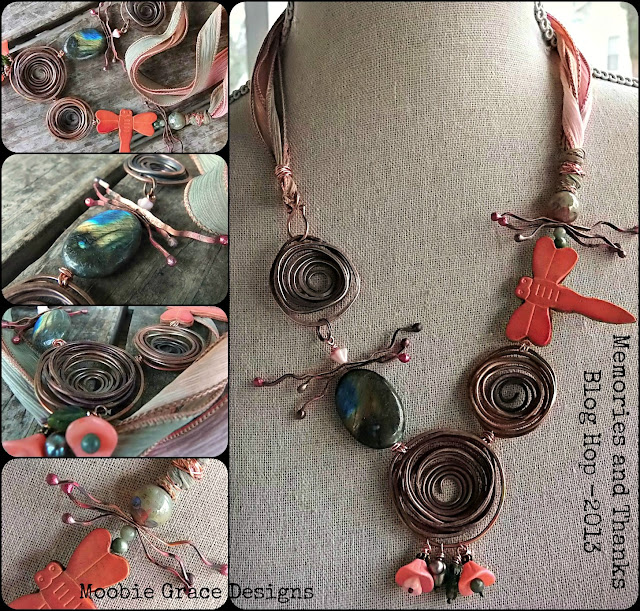 Let me break down the symbolism of each element:

Copper spirals and wavy spikes because that's how words sometimes appear to her (these were my choices in the piece).
The Labradorite & lampwork Grace picked because "everyone sees things differently."
Green jade/pearls because that's her favorite color.
The Czech glass flowers she chose because she said "I'm still pretty even though I have a LD...and so is everyone else!"
The leather dragonfly she wanted to add "because I can do anything except fly!"
The silk ribbon simply because she liked it!

* She also wanted me to tell everyone that it has three dangle charms "because it takes me at least three times to read something for it to make sense!"  < Got to love a kid who can giggle and joke about their biggest challenges in life!  And, that she wasn't too happy that I didn't have a mountain or a hiking bead/charm because that's what she loves to do, and does it well, I might add!

I used to raise my fist and curse the universe for dealing her such a crappy hand in life.  I don't anymore.  There are times when we're both so frustrated with homeschooling that the only plausible thing to do is go eat ice-cream (so we do), but there are also those triumphs that I'm that I'm blessed to be able to be a part of!

These days while I have my moments, I'm almost thankful for the Dyslexia (but not the stigma/bullying/narrow minds)...it's a hard road, but it has opened my eyes to things I was blind to before, and I thank God that Grace never has had that "blindness."

Thanks for stopping by, please take a moment to check out the other participants in the hop!!